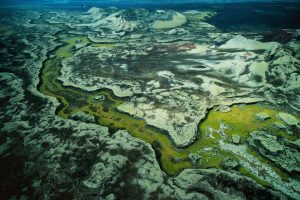 Iceland is mostly volcanic. It was the site of some of history’s biggest eruptions. But the Laki’s (also called Lakagigar, a volcano that is part of the Myrdalsjökull volcanic system) eruption was certainly the biggest. An eruption started on June 8 1783 and lasted until February 7 1784. Meanwhile, along a 25 km long crack, about 15 km3 of lava flowed and covered a 565 km2 surface. There was no powerful explosion but there were very large amounts of sulphur in the magmatic gases (122 million tons of sulphur released mainly as sulphur dioxide) which caused the death of cattle through poisoning and produced acid rain that destroyed crops. For three years after the eruption, a quarter of Iceland’s population died of famine. During summer 1783, in England and in France, many observers noticed that the sun was covered by a bluish mist. A particularly cold winter followed in Europe. It is today estimated that the aerosol cloud released in the upper atmosphere caused a 1 °C temperature decrease in the average Northern hemisphere temperature.