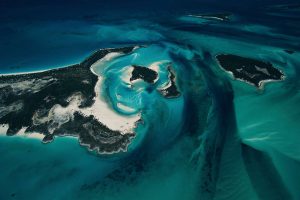 These clear waters are home to one of the richest underwater worlds on the planet. Southeast of Florida and north of Haiti and Cuba, the Bahamas Archipelago consists of more than 700 islands and coral islets. Today, its more than 640,000 acres of exceptional land and sea biodiversity are protected by the Bahamas National Trust. Exposed to hurricanes, with low-fertility soil subject to particularly high water stress due to its permeability, only a few islands are used for tropical crops. Local agriculture produces fruits and vegetables but is short on space, and 80 percent of food goods must be imported. The Bahamas, which has a population of 350,000 inhabitants, is dependent on tourism, which accounts for more than 50 percent of GDP and employs 50 percent of the active population. The archipelago enjoys one of the most prosperous economies in the West Indies and Caribbean, but is also the most vulnerable to international fluctuations. Since gaining its independence in 1973, the Commonwealth of the Bahamas has become one of the leading offshore financial centers in the world; this activity represents 15 percent of its GDP. But the importance of this business has been declining since the government committed to fighting money laundering in 2002. According to some specialists, funds held in tax havens are most often gains from corruption, laundering of criminal activities, and tax evasion.