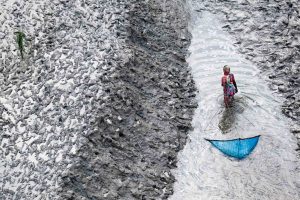 I am coming back from Bangladesh where I have just made aerial pictures of this country which will probably suffer the most from global warming. It is the first time that someone has the permission to take pictures of this country in its the totality. 160 millions people live in Bangladesh. To understand this better, if we gathered all of the Earth residents in United States of America, the population density would remain inferior than the density of Bangladesh. However 25% of Bangladesh’s land is situated less than one metre above the sea and 75% of his territory is submersible. Bangladesh is vulnerable towards two natural disasters which have already been announced. On one hand, rising waters in North due to the melting of ice caps of Himalaya and, on the other hand,  the rising of the sea level in the South causing the erosion of the coast, the farming grounds salinisation and the disappearance of the Chars, numerous ephemeral islands present in the grand rivers and along the coastline.