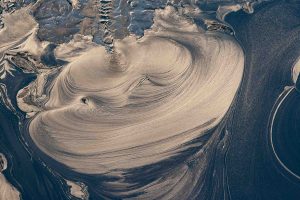 Oil sands that have been exploited for about thirty years represent the second largest oil reserve in the world with an estimated potential of 173 billion barrels. To obtain one barrel of 159 litres of crude oil, one has to extract 2 tons of peat and soil and 2 tons of sand. Oil sands usually lie over 60 metres deep. Pits are dug and enormous trucks that can carry over 400 tons are used to take the oil sands to treatment plants. The water that is pumped in the river is used to separate the tar from the sand in large heated tanks. This tar is then turned into liquid oil before being sent, by pipeline, to supply North America. This titanic task is economically advantageous for the region.With the money from the oil, the population of the town very close to Fort McMurray has rapidly increased over the past few years. However, even if this wealth is advantageous for the province of Alberta, oil companies and the inhabitants, it is at the expense of the environment of us all. As the Boreal forest along the Athabasca River is destroyed, the soil is turned over and there is chemical residue and water contamination. The consequences of this environment exploitation are very serious. Despite the fluctuations of oil prices, extracting Alberta’s oil sands is still profitable and therefore seems set to continue unless the necessities of the fight against global warming come and put a stop to it.