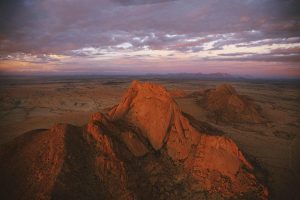 The peaks of the Grosse Spitzkoppe (5,666 feet, or 1,728 meters) and the Kleine Spitzkoppe (5,193 feet, or 1,584 meters) rise above the wild, desert region of Damaraland in northwestern Namibia. Thanks to the combined action of wind, rain, and lava, these granite domes emerged from the sedimentary strata that once covered them and which eroded 120 million years ago. At that time, the coast of Brazil was pressed against that of Namibia to form a single ancient continent, Gondwana. Much more recent are the many prehistoric sites in this region, which include rock carvings 27,000 years old. Damaraland bears the name of one of Namibia’s oldest ethnic groups, the Damaras. This people still accounts for 7 percent of the country’s present population, a quarter of whom live in the region. Damaraland is now very sparsely populated, and it is one of the few parts of Africa where antelope, giraffes, elephants, and even black rhinoceros can roam free outside national parks or protected areas.