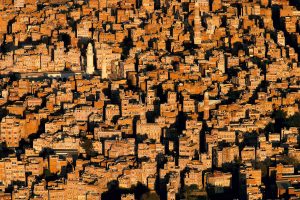 The magic of Sanaa, Yemen’s capital, resisted the curiosity of Western travellers for a long time. It is located in a basin at an altitude of 2350 m and is indeed very difficult to access. Still today, the old town is a labyrinth of back streets that smell of spices, myrrh and incense of which Yemen is one of the largest producers. At the heart of the souk, the Al Khbir Mosque’s white minaret contrasts with the warm brown of the 5 000 traditional house-towers. These high rammed earth constructions (a mixture of straw, water and clay dried in the sun) with facades decorated with delicate plaster friezes make Sanaa a spectacular town. But whilst there were only 80 000 inhabitants in 1975, it suddenly had to absorb a million Yemenis driven out of Saudi Arabia in 1990 because of Yemen’s pro-Iraqi attitude during the Gulf War. To face this population influx, some promoters hastily built multicoloured concrete buildings that mar the town’s surrounding area. Strict regulations now forbids new townplanning mistakes; the old town has been listed as a UNESCO World Heritage Site since 1994.