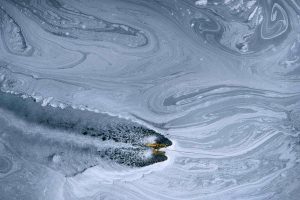 The Tungkang lagoon, southwest of the island of Taiwan, is chequered with brackish pools devoted to farming seafood, particularly shrimp, which is highly profitable. Parting the white froth produced by the shrimp’s waste, this aerator oxygenates the tanks where they are raised. Over the last ten years, world production of shrimp has risen sharply, reaching 1.5 million tons per year on average. Asia, where the tiger shrimp is the predominant species, produces 80% of the world’s output. Since shrimp need warm water to grow, shrimp farms are established in coastal regions in the tropics, where they often replace mangrove swamps – unique, fragile ecosystems that are a refuge and breeding ground for fish and crustaceans. Moreover, large amounts of waste from these intensive farms, as well as the antibiotics widely used, pollute the surrounding area. It is estimated that in some areas, for every 1 kg of farmed shrimp, nearly 447 g of wild fish and shrimp disappear. This is harmful to local people for whom intensive shrimp farming, aimed at export markets.