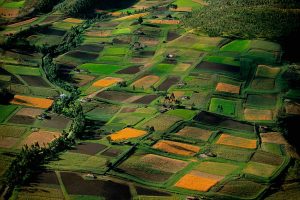 Between the Cordillera Occidental and the Cordillera Real, the plateaus around Quito enjoy the humid, mild climate of the Sierra, ideal for growing cereal grains (corn, wheat, barley) and potatoes. Though agriculture now only accounts for 6.7 percent of the GDP of this country of 14 million, it employs 8.3 percent of the active workforce. It is as important a force on the landscape as it is in the country’s history: the agrarian reforms of the 1960s and 1970s, which ended the hold of the Spanish settlers’ great haciendas, did not resolve the issue of unequal distribution of farmland. The most productive lands, found in the valleys and on the coasts, which are devoted to export crops (bananas, sugarcane, coffee, cocoa), remain in the hands of rich landowners, while small farmers share land on the high plateaus and barely get by on their production. In a country plagued by increasing pauperization (65 percent of the population is indigent, 8.7 percent unemployed, and 45 percent underemployed as of 2008), this inequity is a spawning ground for crisis.