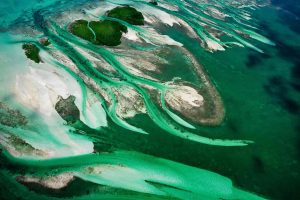 To the northeast of Key West, the capital of this small coral archipelago, uninhabited islets covered by mangroves emerged from the accumulation of coral sand thanks to the never ending movement of the waves and currents coming from the Straits of Florida that connects the Atlantic Ocean to the Gulf of Mexico, combined for some years with the passage of cyclones, which waves can make the islets submerge completely. This fragile ecosystem that has more than 250 species of birds is protected by the National Wildlife Refuge – NWR. Established in 1938, the National Wildlife Refuge Great White Heron is a haven for great white herons, an endemic species of herons and one of the only populations (less than 1.000 couples) that nest in Keys. This long-legged bird was once much hunted for its feathers, which were widely used for making hats ornaments. Due to this fact today the birds and its ecosystem are under protection. Three species of marine turtles can be found on the reefs and two of them – the luth and the green turtle – go there to lay their eggs. Less known than the national parks, the NWR exist since 1903 and were actually the first real instruments for the protection of fauna and flora in the world. Therefore, 61 million hectares are protected in the United States, two times more than in national parks. Different from the national parks, which are open for tourist visitation, when the species protection so requires, all or part of the 555 reserves are closed to the public. Visitors are forbidden in Barracuda Keys as well as in the group of islands of the refuge.