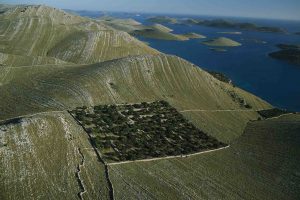 The eastern edge of the Adriatic washes the shores of the 150 islands and islets that make up the Kornati archipelago. The largest island, Kornati, is 12.5 square miles (32.5 km2) in area and accounts for two-thirds of the archipelago’s land surface. The fold in the Earth’s crust that formed the Kornati mountain range was produced by the collision of the Adriatic and European tectonic plates. The melting of glaciers and rise in sea levels after the last Ice Age, 20,000 years ago, made the mountains into an archipelago which was then eroded by the sea and the wind, exposing fine striae in the limestone. A century ago, the inhabitants of the nearby islands used these rocks to build dry-stone walls to pen in their sheep and keep them from their olive groves and vineyards. Overgrazing has done considerable damage to wildlife and to the thin vegetation. This desertification contrasts with the richness of the waters around the archipelago, where most of the Mediterranean’s fish and mollusk species can be found. Nevertheless, these too are threatened by fishing, which sometimes uses illegal methods. Almost 30 percent of the world’s fish species are either extinct or facing extinction.