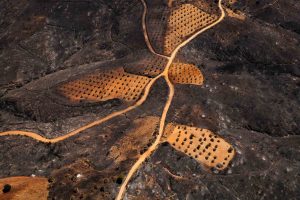 The island of Euboea is 93 mi (150 km) long and 6 to 31 mi (10 to 50 km) wide, the second largest Greek island after Crete. Before it was ravaged by fire in 2007, its landscape consisted of cultivated basins and forest-covered hills. The fields and olive groves were largely spared because the ground was free of vegetation when, in late August, about a hundred fires, probably started by arsonists and fanned by violent winds, burned from the north of the country to the southern tip of the Peloponnesus. Athens and its suburbs were covered in a thick white smoke and ashes, and a state of emergency was declared throughout the country. With Greece unable to handle the fires alone, sixteen European Union nations participated in the greatest continental firefighting operation ever organized. But the two weeks of blazes were murderous with sixty-five deaths. Thousands of people were left homeless, hundreds of houses devastated, and 444,780 acres of vegetation went up in smoke. This disaster has had significant economic and environmental consequences. The cost of the damages could be greater than $1.38 billion (0.6 percent of the GDP) and environmental experts estimate it will take twenty years for the landscapes to return to what it was. It is also likely that some of the burned land will become the subject of property speculation.