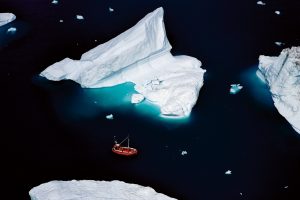 Most of the icebergs drifting in Baffin Bay and the Labrador Sea come from Greenland’s West coast. There are about 10.000 to 40.000 of them a year. Every spring and every summer, deep in the fjords, the glaciers calve. This means that as they move forward, the glaciers loosen blocks of ice because of the movements of the sea swell and the tides. Iceberg that must be more than 5m above the water to be worthy of the name (mountain of ice) travel and where they end up depends on the currents and winds. The biggest ones, with increasingly eroded shapes, will take two or three years and perhaps even longer to get off the coast of Newfoundland in the North Atlantic. Some will even cross the 40th parallel south. One of these icebergs caused one of the biggest maritime disasters, the Titanic shipwreck, in 1912 that killed over 1.500 people. Greenland’s ice cap is the second largest in the world after the Antarctic continent. It was created by the accumulation of snow falling for over 100.000 years. It covers 82% of the big island and it is 3.000 m thick in places. If all this ice melted, the general level of seas would increase by about 7m. Because of global warming, Greenland’s ice sheet is melting at a rate of 248 km3 a year and scientific studies show that this phenomenon has sped up in the past ten years.