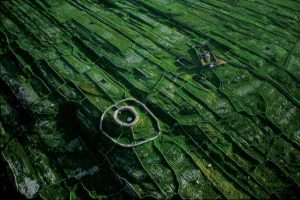 The fort of Dun Eochla, rising above the close-cropped grass, was built centuries ago on this island some 30 miles off the Irish coast. The Aran Islands contain some of Europe’s most magniﬁcent prehistoric remains. This trio of islands—Inishmore, Inishmaan, and Inisheer—with their high rocky cliffs protect the Galway coast from the violent winds and currents of the Atlantic. For centuries, their inhabitants have helped keep the soil fertile by regularly spreading a mixture of sand and seaweed on the rock to produce the thin layer of humus needed for farming. To protect their plots from wind erosion, the islanders have built a vast network of almost 7,500 miles (12,000 km) of low walls, which give the land the appearance of a vast mosaic. Growing numbers of tourists are visiting the Aran Islands—whose inhabitants live chieﬂy by ﬁshing, farming, and livestock—drawn especially by their wealth of archaeological remains.