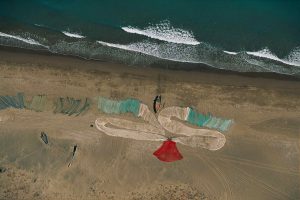 This seine net—a long net that is dragged over a sandy sea bottom—is ready to be used once again. The fishermen have patiently folded it up and laid it alongside their boats, and they now need only pull at the net’s two ends to harvest their catch. More than 80 percent of Oman’s fish are caught by such traditional methods, but the sultanate would like to modernize this sector. The country is well aware of the limits to its oil reserves (700,000 tons of crude) and would like to diversify its economy. Training fishermen is one of its priorities. With the help of young, qualified staff, it hopes to increase national output while still managing fish stocks sustainably; for while the Gulf of Oman is rich in fish, certain species there are threatened. Overfishing is a worldwide problem, and catches are falling—in the North Atlantic, for example, they have dropped by 25 percent since 1970.