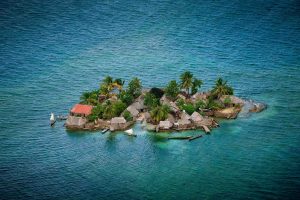 For almost a century the Kuna indians who live on the coast and on forty islands on the Caribbean side of Panama gained a statute of semi-autonomy for its territory called Guna Yala. The 400.000 inhabitants of the islands, who have the right for self-governance, have forbidden any kind of foreign investment on their land. If on one hand they receive visitors and get part of their income from tourism, on the other the Kuna are not invaded by foreigners nor threatened by this kind of tourism that in other parts of the globe might look like human safaris. In 2011 Panama’s government has committed to ratify the Convention 169 of the International Labour Organization relating to indigenous and tribal peoples. This instrument recognizes «the aspirations of these peoples to exercise control over their own institutions, ways of life and economic development and to maintain and develop their identities, languages and religions, within the framework of the States in which they live». The Convention is currently the only legal document for the protection of the rights of indigenous people. The ratification of the Convention means that governments commit to guarantee in an effective way the physical and spiritual integrity of the indigenous people who live on their territory and to fight any discrimination against them. So far, only 22 states have signed it, among which two neighbouring countries to Panama: Colombia in 1991 and Costa Rica in 1993. According to the UN, the indigenous populations constitute at least 5.000 human groups, representing 370 million people who live in over 70 countries.