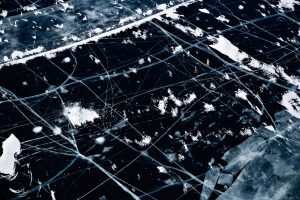 The Baïkal Lake in Siberia holds at least three world records: the deepest lake (maximum depth of 1.637m), the largest volume of freshwater (in a liquid state), 23.000 km3, which represents about 20% of freshwater on the Earth’s surface and lastly, geologically speaking, the oldest lake since it was formed 25 million years ago. The Baïkal Lake is 636 km long and 80 km large and was created by a rift which is a big fault opening on the Earth’s crust. This rift is still active and gets wider regularly, by 2 cm a year. As time has gone on, 7 km of sediments have accumulated beneath the actual lake floor. The Baïkal Lake is also very endemic since 60% of the 1.200 animal and plant species listed there, among them, the only species of freshwater seals in the world, do not exist anywhere else. The most famous endemic fish is the Baikal omul (Coregonusautumnalis migratorius), a fish similar to salmon. It was the main species fished commercially but today the species is under threat and quotas decrease every year (2.100 tons in 2007, about 1.800 tons in 2008). The presence of a paper factory on the banks of the lake since the 1950s is a major source of chemical pollution. Towns and industries that often do not have wastewater treatment plants and agricultural activities on the lake’s drainage basin, which stretches to Mongolia, also pollute the water.