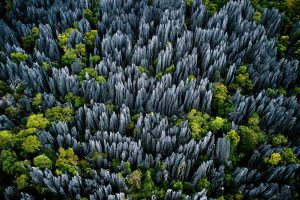 The unusual Tsingy mineral forest appears suddenly in the West of Madagascar. This geological formation called karst is the result of erosion by acid rains that have gradually dissolved this limestone plateau and chiseled these sharp ridges that are about 100 feet (30 meters) high. It was declared a Strict Nature Reserve in 1927 and listed as a UNESCO World Heritage Site in 1990. This practically impenetrable labyrinth (whence its name, tsingy meaning “to tiptoe” in Malagasy) is home to specific plant life and wildlife and some of it has not yet been identified. On the“Big Island”, a 226.642 square miles (587.000 square kilometers) fragment of land created by the continental drift has been isolated for 165 million years in the Indian Ocean off the coast of Southern Africa, unusual and diverse animal and plant has developed. Madagascar has exceptional plant life and wildlife: 90 percent of the 12.000 or so vegetal species and 80 percent of animal species identified on the island cannot be found anywhere else. One of these endemic species, the Madagascar periwinkle (Catharanthus roseus) is used by the pharmaceutical industry to treat leukemia. However, many of Madagascar’s species are threatened with extinction.