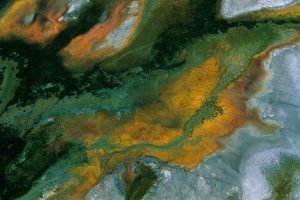 Located in the southwest of the Dominican Republic, on the border with Haiti, Lake Enriquillo is the largest saltwater lake in the Caribbean (102 square miles, or 265 km2). Lying 130 feet (40 meters) below sea level, the lake was created during the glacial era, when the falling sea level removed the bay that divided the island in two, and created a huge saltwater basin, now isolated from the Caribbean Sea. From this distant past, Lake Enriquillo retains coral, the shells of sea animals, and a salinity that is three times greater than the ocean. Its wildlife is exceptional: it is home to 200 wild American crocodiles (an endangered species), as well as the spectacular rhinoceros iguana. In the center of the lake lies the national park of Isla Cabritos, which is visited by several dozen species of migratory birds, including the greater flamingo. A UNESCO World Heritage site and a Biosphere Reserve since 2002, Lake Enriquillo is currently the subject of an ecotourism plan being developed by the state of Haiti and the Dominican Republic, despite their longtime dispute over this shared natural site.