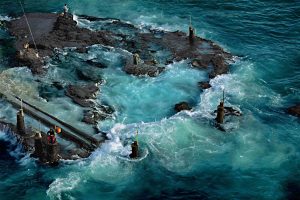 The rocky headland of Ras Beirut, at the city’s northwest corner, extends into a narrow pier where ﬁshermen venture, undaunted by the rough waves. Apart from recreational ﬁshing, the Lebanese practice small-scale commercial ﬁshing from the many small ports dotted along the country’s 130-mile (210-kilometer) coastline. Despite competition from Turkey, which catches 30 percent of the 1.3 million metric tons of ﬁsh taken from the Mediterranean every year, ﬁshing retains an important social and cultural role in Lebanon. Unlike the north Atlantic, ﬁshing around the shores of the Mediterranean is mostly small-scale, as the makeup of the ﬂeet shows: 85 percent of ﬁshing boats are coastal, 10 percent are trawlers, and 3 percent use seine nets. Nevertheless, several species—hake, sole, bass, and monkﬁsh—are ﬁshed at a higher rate than stocks can replenish themselves. International agreements have recently been put in place to try to improve the coordinated management of the Mediterranean’s ﬁsh resources.