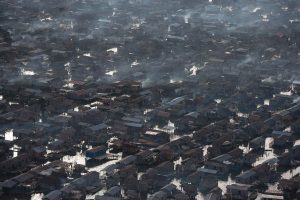 Located on the edge of the Atlantic Ocean and a lagoon, Lagos is the biggest town in Nigeria and the main commercial and industrial centre. It does not have any tourist attractions. The former capital of the country has been suffering from an excessive demographic increase since its independence in 1960 and today it has about 9 million inhabitants. A 10 kilometre bridge, the Third Mainland Bridge that links the business quarters in the city centre on Lagos Island to the airport, hangs over Makoko, a shanty town that stretches out into the lagoon. Fishermen who have come from the border of Benin to make money, have piled up in huts on stilts which can only be accessed by dug out canoe. In Makoko, where over 100.000 people live, there is no running water, no electricity and no sanitary systems. The first African oil producer in volume, with about 2.6 million barrels/day in 2010, Nigeria is still relatively poor. This country which has the highest population in Africa (155 million inhabitants) has an official (but actually much less) electricity production capacity of 5.900 MW for all its territory. Due do constant cuts, factories, companies and hospitals have to turn to costly and polluting generators.