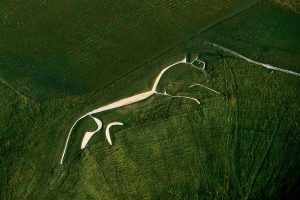 This 365-foot-long (111 m) silhouette of a horse carved into the chalky side of a hill in the county of Oxfordshire, west of London, stands out clearly downhill from the ruins of Uffington castle. Its similarity to the designs on ancient coins suggest that it is the work of Celts during Iron Age, from around 100 BC. Local tradition maintains that this stylized depiction is the image of a dragon, drawn in homage to Saint George, who, according to legend, killed the monster on a neighboring hill. But the most likely hypothesis is that this engraving was dedicated to the cult of the Celtic goddess Epona, who was usually depicted in the form of a horse. A dozen other white horses, carefully preserved, decorate hills in this region and neighboring Wiltshire, illustrating the age-old human desire to trace onto the landscape images of power and dreams.