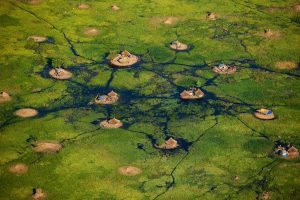 This region, is inhabited by the Dinkas (instead of using this name given to them by the settlers they prefer to call themselves Jieng) an ethnic group that practices the agro-pastoralism in great extensions of marsh areas, savannah and wooded savannah of the White Nile valley and its tributary, the Bahr el-Ghazal. This part of Africa experienced a series of civil wars, opposing North and South Sudan, formerly protected by the Anglo-Egyptian treaty. The first conflict that occurred in the region, in which half million people died, went on from 1955 to 1972. It ended with a peace agreement signed in Addis-Abeba, which gave relative autonomy to South Sudan. Not quite solved, the war started again in 1983 and went on until 2002, with a series of massacres and hunger, leaving 2 million deaths behind. In 2005 a new agreement was signed foreseeing a period of 6 years of transitory autonomy followed by a self-determination referendum. The referendum occurred in 2011 and more than 98% of the votes were in favour of the secession. The independence of the new state was declared on July 9, 2011. Djouba is the capital city. The Republic of South Sudan was the 193rd recognized state in the UN and the 54th member of the African Union. Today it has a population of over 8 million inhabitants living in a territory of 620.000 km2.