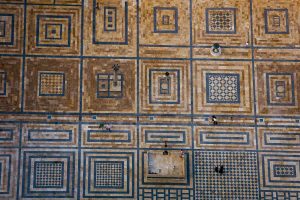 Standing in the heart of the old city of Aleppo and on UNESCO’s World Heritage List since 1986, the Great Mosque was built in the year 715 and reconstructed in 1129. While Damascus, the country’s capital, was already an important place in the Roman-Byzantine world, Aleppo began to gain stature in the year 1000. The Roman plan was adapted and the agora, a vast square, became a mosque. Instead of having a building in the center of an open space, the open space is placed in the center of the monument. The Great Mosque’s courtyard is the largest one in the old city. People come here to pray, but also to relax, chat, and meditate. The people of Syria are 90 percent Muslim and, although required to vote, are forbidden to vote against the government. President Bashar al-Assad succeeded his father in an unopposed referendum on July 17, 2000. In October 2005, leading figures and parties of the secular opposition expressed their desire for peaceful and gradual change and the holding of free and transparent legislative elections, signing “The Damascus Declaration for National Democratic Change” to that effect. In late 2008, after twelve reformers from the civil sector were sentenced to two and a half years in prison for signing the “Damascus Declaration,” the European Union asked that these nonviolent militants be freed and called on the Syrian government to honor its international commitments, as Syria had signed and ratified the 1969 Universal Declaration of Human Rights, as well as the International Covenant on Civil and Political Rights.