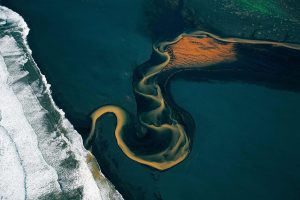 Fed by the Myrdalsjökull, a 308-square-mile (800-square-kilometer) dome of ice in the southwest of the island, the Markarﬂjót River ﬂows round the northern edge of the small Eyjafjallajökull Glacier, tracing a hesitant course over a broad bed of basaltic sediments before ending its journey on a beach of black sand on the Atlantic shore. Like all glacial rivers, the Markarﬂjót spreads out over a plain from which glaciers have receded, forming a dense, intricate network of channels. Its course changes constantly, and its ﬂow reaches a peak in July and August, when the ice melts. Global warming could disrupt this seasonal cycle. The Vatnajökull ice cap is the country’s biggest glacier; with an area of 3,203 square miles (8,300 km2), it is as big as all continental Europe’s glaciers combined. Icelandic glaciologists have warned that the Vatnajökull has been receding at an average of approximately 3.25 feet (1 m) per year for some years, and that snow is replaced by rain at altitudes of less than 3,279 feet (1,000 m). If this trend continues, the glacier could disappear by 2100.