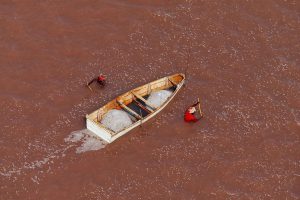 These men are not paddling. Instead, they move by using a stick to break the salt crust that has formed under the surface of the lake, whose water owes its color to microorganisms living in it. Twenty years ago, the Pink Lake, once known as Lake Retba, was popular with fishermen because of its teeming waters, which were fed by the winter rains that flowed gradually off the surrounding dunes. But persistent drought interrupted this supply of fresh water and considerably reduced the lake’s area. As a result of heavy evaporation, its salinity rose to a level comparable with the Dead Sea’s—320 grams of salt per liter (the Atlantic contains 30 grams per liter). Fishing naturally gave way to salt extraction, at the rate of some 30 tons per day. Like other countries in the Sahel belt, Senegal is threatened by desertification. Nevertheless, it is one of the countries in Africa that is best supplied with drinking water—78 percent of the population has access to this vital resource.