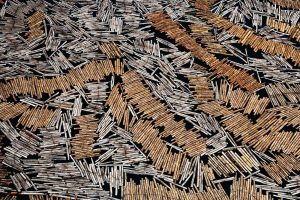 “It is hard to believe that then years have already passed since I first set off on this Earth From Above adventure, with my small team of followers around me. We never dreamed in 1993 that the project could take on such proportions ten years later. Our idea was simple; we would raise public awareness of the Earth’s beauty in order to better condemn its problems. It was simple, certainly, but ultimately more ambitious than any of us could have imagined. We have been working under the pressure of an overwhelming success, with the obsession of trying to remain equal to the task. It is an honor that thousands of people have traveled to view the exhibitions or buy the book. The success has changed us; we are increasingly more demanding of the depth of our knowledge of the Earth and her environment. Feedback from a great many readers, as well as discussions with scientists, has reinforced our understanding, but at the same time has raised certains doubts. We are aware that as time passes, there is always something more to say, show , or prove. The more aware the public has become, the more my commitment has evolved in the face of expectation.