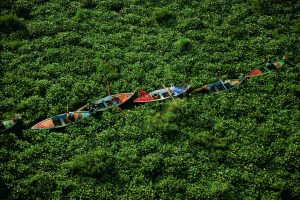 The Common Water Hyacinth (Eichhornia crassipes) is an invasive aquatic weed. It was signaled for the first time at the beginning of the 20th century in the Nile Delta, in Egypt and in the Natal Province of South Africa. It is originally from Brazil where it develops moderately in its natural habitat. It was introduced on the African continent and elsewhere as an ornamental plant and it has colonized over 50 countries in the world over less than a hundred years. It hinders navigation and obstructs agricultural irrigation canals and the turbines of hydroelectric dams. The thick floating carpet it creates, which surface can double in 12 days, transforms the ecosystem. Preventing sunlight from entering the water column and oxygen exchanges, it considerably reduces the biological diversity in aquatic ecosystems. No effective solution has been found to eradicate this invader but mechanical and biological control methods make it possible to limit its proliferation. Only one percent of introduced species have an adverse environmental impact and cause economic losses in their new environment but their presence is still the second most frequent cause of species extinction in the world after the destruction of natural habitats.