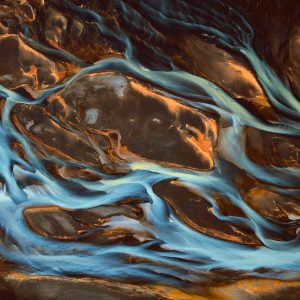 The Pjorsa’s (or Thjorsa) River flows over land covered by lava. It is the longest in Iceland and runs over 142 miles (230 kilometers). It carries a lot of mineral particles (also know as glacial flour) to the ocean and this gives it its characteristic color. The island is covered by a large network of non-navigable rivers that mostly come from sub glacial torrents, whose variable and tortured courses make it difficult to build any permanent structures such as bridges and dams. However, hydropower makes it possible to satisfy over 80 percent of the country’s electricity needs, and there are still many possibilities since only a quarter of the hydraulic potential is being exploited. But building dams to power new metallurgical plants is increasingly contested. Iceland is therefore considering using its sources of renewable energy (hydraulic, geothermal) to produce hydrogen in a pioneering process to convert its whole economy to this new non polluting fuel by 2040. Ruined by financial speculation – the three most important banks of the country went bankrupt – Iceland had to interrupt this project postponing it to 2050.