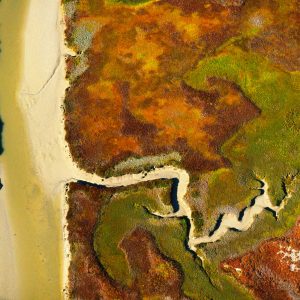 North of Cape Town, this National Park is home to the Langebaan Lagoon, a vast wetland where over 55.000 birds breed. Many of them are migrating from the Arctic and Antarctic to enjoy the austral summer. With 200 reserves and national parks covering more than 27.000 square miles (70.000 square kilometers) –almost 6 percent of the surface area of the country– South Africa is one of the most important wildlife sanctuaries on the planet. It is possible to observe the “Big Five”: lion, leopard, elephant, rhino and buffalo. This country has been pioneering nature conservation: the creation for and by white hunters of the first national park, Kruger Park, goes back to the end of the nineteenth century. Today, safari photography has largely replaced hunting. This activity is very important and has become an important part of tourism, with 7 million tourists coming each year to discover the African wildlife. Under the leadership of South Africa, other southern African countries are jointly developing their protected areas to create large transfrontier parks (Transfrontier Peace Park), that offer larger areas for migrating animals that ignore national borders.