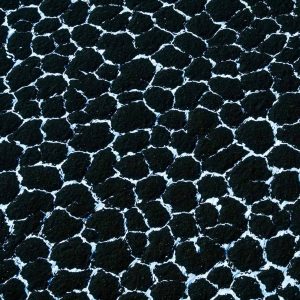 The bottom of the McMurdo Dry Valleys, one of the rare iceless places on the continent, is covered in polygonal patterns similar to those of a dried-up pond. Extreme temperature variations from summer to winter, when a six-month night envelops the continent and makes temperatures drop by 90°F (32°C), cause ice buried in the ground to freeze and thaw, creating this strange mineral tapestry. The reason for these patterns has not been completely uncovered but their location has been clearly determined: they appear where the ground is permanently frozen, both in Antarctica and the Arctic. But planet Earth does not hold a monopoly on this type of design. The pictures of Mars delivered by the Mars Global Surveyor and the rovers Spirit and Opportunity are striking: patterns utterly similar to those of the Dry Valleys can be seen in the polar regions of the red planet. These are on a giant scale, however—the polygons on Mars are a few miles wide, those on Earth only 30 to 100 ft (9 to 30 m).