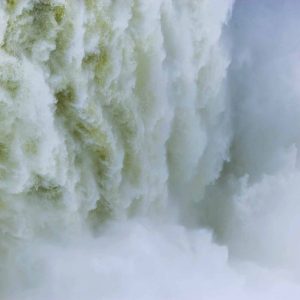 On the border between Argentina and Brazil, the 230-foot (70-m) Iguazu falls form a semicircle 1.67 miles (2,700 m) across, which attracts XXXXX tourists every year. On the Argentine side, the falls are part of the Iguazu National Park, which was added to UNESCO’s World Heritage list in 1984. The park is home to 44 percent of the country’s animal species and is one of the best-preserved remnants of South America’s Atlantic forest. This unique subtropical forest ecosystem runs along Brazil’s ocean fringe and stretches slightly inland in Paraguay and Argentina. It is regarded as one of the ﬁve highest-priority areas for the preservation of the world’s biodiversity, a “hot spot” where 20,000 types of plant live—8,000 of them endemic—as well as 1,668 species of land vertebrates, of which more than a third are found nowhere else. This wealth of biodiversity has been granted a stay of execution, for deforestation and urban development have already destroyed 90 percent of the original habitat.