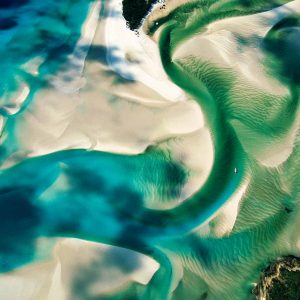 Uncountable coral islands and islands of continental origin are strew across the narrow corridor which separates Queensland, in the northeast of Australia, from the Great Barrier Reef, situated some 18 miles (30 kilometers) off the mainland. Whitsunday Island, with an area of 42 square miles (109 square kilometers), is the biggest of the 74 islands that constitute the archipelago of the same denomination origin, named by the British navigator James Cook who discovered these islands in 1770, on Whit Sunday. The beach of Whitehaven is famous for its soft white sand mainly composed of pure silica. This site belongs to the marine park of the Great Barrier which welcomes every year about 2 million visitors. In these zones, fishing is prohibited and tourism is regulated to have only a moderate impact on this very sensitive environment. Nevertheless, land-based pollution and repeated invasions of Crown-of-thorns starfish damaged almost 20% of the coral reefs in 30 years. On the other hand, in the long run, climate change due to the emission of greenhouse gases, was identified as the biggest threat to the rise of the ocean’s surface temperature, and to the rise of the water and acidification levels.