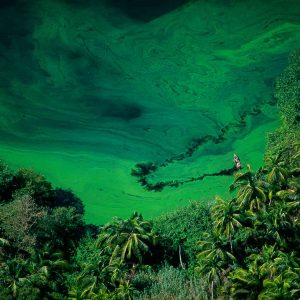 The mangrove-fringed lagoon of Los Micos (“the monkeys”) is a concentration of tropical luxuriance within the Jeannette Kawas National Park. The park is named after its sadly missed director, the country’s leading environmental activist, who was assassinated in 1995 while campaigning against tourism developments that threatened the site. A few recently built hotel complexes coexist with traditional villages. Despite the region’s alluring beaches, tourism is still barely developed in Honduras, and the country’s economy is dominated by banana plantations owned by U.S. companies. Extreme poverty renders the population highly vulnerable to natural disasters: in 1998, Hurricane Mitch left 11,000 dead and a further 10,000 missing, and claimed 3 million victims in all—out of a total population of 6.6 million.