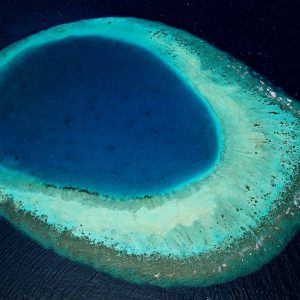 The Eye of the Maldive Islands is part of a faro, ring-shaped reefs emerging during tidal low water each with their own sandy lagoon and separated from one another by deep channels. In the heart of the Indian Ocean, the archipelago of the Maldive Islands peaks in 8 feet (2.50 meters) above sea level and groups 26 large atolls including 1.192 islands, among which about only 300 are permanently or seasonally inhabited. The emerged land represents less than 300 m2. The archipelago was severely affected by the tsunami of December 26th, 2004 which caused 83 deaths, more than 2.000 injured persons, and left behind about 10.241.000 cubic feet (290.000 cubic meters) of demolition waste, according to the United Nations Environment Program. The perimeter of certain islands was modified; others were gobbled up by the sea. According to estimates, the archipelago, where 80 percent of land area is less than 3.3 feet (one meter) above sea level, is threatened in the long term. With an economy depending mainly on the tourism (650.000 visitors a year), the Maldive Islands are the richest state in South Asia. The government earns more than 250 million euro every year from tourism. The president elected at the end of 2008 wishes to use a part of these funds to buy lands in India, in Sri Lanka or in Australia, to allow the 380.000 Maldivians to resettle. Before 2050, 150 million people could be forced to leave their homes because of environmental problems, in particular connected to the global warming.