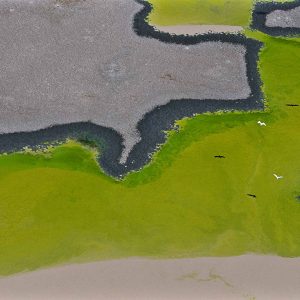 Mexico contains a great diversity of climate and landscape, including deserts, mountains, hardwood forests and, as here, lagoons alongside mangroves—a subtropical rainforest typical of alluvial coasts. Although Mexico boasts more than 900 species of cactus, 1.000 orchids and almost 450 of mammals, it is the country’s variety of birds that is most striking: no fewer than 1.000 species, including the famous quetzal, also known as the “bird of the Aztecs.” Mangrove swamps are a favorite haunt of migrating birds. Here they find plentiful food: insects, mollusks, shellfish, shrimp and small fish, which come to breed at the feet of the mangroves, a tree peculiar to this mixed ecosystem that is partly sea and partly land. Mangroves are essential to marine life. They also protect the shoreline, holding in place the sediments deposited by rivers and curbing the ocean’s erosion by acting as a breakwater.