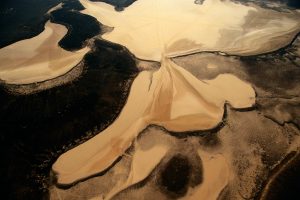 Benefiting from 19.5 to 23 inches (500 to 600 mm) of precipitation per year, northern Jordan presents a landscape of steppes combining sand and vegetation, as seen here between As Safawi and Qasr Burqu’. The country as a whole, however, is 80% desert and receives less than 4 inches (100 mm) of rainfall each year. The principal water source for this almost landlocked territory is the Jordan River, which gave its name to the country. The use of this waterway, which forms the western border with Israel and the West Bank, is a geopolitical stake in the region. Access to water sources is a problem for all countries of the Near and Middle East, especially those that control less than the entire course of a river, including its source and its outlet. The waters of the Tigris and Euphrates (Turkey, Syria, Iraq) and the Nile (Sudan, Egypt) hold similar importance. At present it is estimated that some ten conflicts in the world involve a dispute about water.