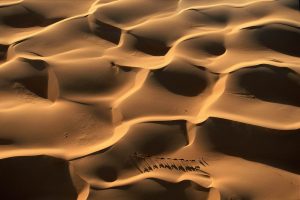 The Sahara, the largest sand desert in the world, is 9 million km2 wide (the equivalent of the United States) and is spread over eleven countries. On its Western border, Mauritania, three quarters of which is barren is particularly affected by anthropogenic desertification. Overgrazing and wood gathering for fire are gradually eliminating the vegetation that fastens the sand of the big dunes, making the progression of the sand threatening towns like Nouakchott easier. The capital which was erected on a grassy plain in 1960 several days walk away from the Sahara now has the desert at its door. Arid and semi-arid areas cover two thirds of the African continent and their fragile soil is deteriorating rapidly. During the past half-century, 65% of African arable land and 31% permanent pastures have thus been degraded. This has caused a decrease in crop yields and had repercussions on food security. In this vicious circle that is hard to break, poverty is both the cause and the consequence of the degradation of farmable land and the decrease in agricultural production.