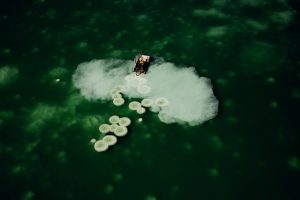 The Dead Sea, which is 75km long and 15km wide, is the lowest point on the planet, 418 metres below sea level.  Its colour, which varies from place to place, is marked by white patches, a sign of its high salt content, nine times higher than the ocean average: no plant or animal life is possible in this part of the valley.  The Dead Sea is shared by three countries, Israel and the West Bank to the West, and Jordan to the east.  But the Dead Sea has lost 30% of its surface area since 1972, and its level is dropping by nearly a metre every year: its waters, along with the River Jordan which feeds it, is being diverted to irrigate the Negev desert.  For these three countries, the critical water shortage threshold has been reach, with renewable water resources less than or only just equal to 500m3 per year and per person.  More than ever before, access to water resources, such as water courses, lakes and the water table, have become strategic for countries in the area, and their control is a source of conflict.