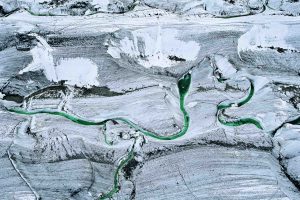 Kirghizstan is one of the highest countries in the world and it has innumerable glaciers, especially on the Tian Mountains, which highest peak is called Jengish Chokusu with 7.349m. It is estimated that at this location, glaciers have lost 25 to 35% of their surface during the twentieth century because of global warming. The frozen masses on top of the mountains are the planet’s water castles. Even though on a planetary scale they only contain 4% freshwater, half the world’s population depends on them for its water supply. They indeed play a part in regulating the resource’s availability. During the cold season, they accumulate precipitation as snow that they restore when they melt in summer. But today, glaciers are melting all over the planet. For example, it is estimated that even in the Himalaya Mountain Range, the highest in the world, one third of the glaciers will have disappeared by 2050. The first consequences can be felt: many mountain lakes, especially in Nepal could overflow and flood the inhabited valleys downstream. If nothing is done to stabilize the atmosphere’s current rate of warming, these types of floods will be replaced, at the end of the century, by an era of water shortage because it will be impossible to reconstitute the frozen ice.