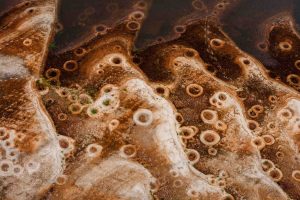 The climate here is equatorial, with two rainy seasons, a lesser one and a major one, separated by slightly less wet seasons. The amount of precipitation determines whether the waters of the Ogooué River are high or low. The low water level uncovers the sandbanks on which the river’s fish dig funnel-shaped nests to lay their eggs on the gravel. In 2008 the Gabonese authorities carried out experiments aimed at diversifying the species of fish farmed. The tilapia could be a new resource for the country’s fish farming for, though Africa remains the tilapia’s native continent, African production remains extremely limited and is often reserved for local exploitation. Discovered by developed countries in the past twenty years, tilapia are currently farmed in about a hundred countries. With an estimated production of 2.7 million T (2.4 million t) (including 2.2 million T from farming, half in China), the tilapia has experienced the strongest growth of any aquatic species in recent years. The tilapia’s diet is largely herbivorous, but it also eats mosquito larvae, which led to its initial introduction to Asia to battle malaria in flooded rice paddies. It grows quickly and can reach the market size of one pound in eight months. The development of tilapia production could be a viable alternative to the scarcity of wild species. Today, nearly half (43 percent) the fish consumed globally come from aquaculture.