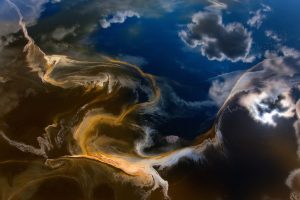 Lake Magadi is located on a fault of almost 7.000 km on the East African Rift Valley formed 30 million years ago on the earth’s crust. Sided by high volcanic plateaus, this huge hole, a series of rifts that go from the Red Sea to Mozambique, hosts several great lakes (Turkana, Kivu, Tanganyika, Malawi…) and smaller ones, as Magadi Lake, on the south of Kenya. Fed by rainwater that washes the neighboring volcanic slopes, carrying minerals and moreover by saline hot springs, the lake’s water contains a high salt content. Although it is inhospitable, this lake is not dead. One sole endemic fish species lives in these alkaline waters (pH10), which temperature is higher than 40ºC. Millions of small flamingos (Phoenicopterus minor) come to feed from microalgae, shrimps and other crustaceans that proliferate in its waters. One can not fail to mention that the lake’s sesquicarbonate crystals – the purest in the world – have been exploited for over a century to produce sodium carbonate used in the glass and detergent industries.