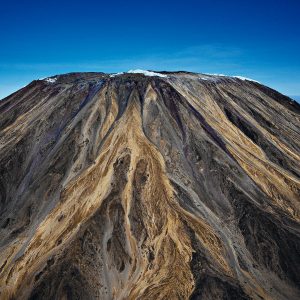 Kilimanjaro famous eternal snow became legendary when Ernest Hemingway wrote about it in 1938. This snow which is more than 11 000 years old is about to disappear. Global warming, deforestation, very low levels of precipitation : scientists are wondering why the snow on Africa’s highest summit which is 5 895 metres high is gradually disappearing. Its ice cap which was estimated at 12 km2 in 1900 has now gone down to 2 km2. It has not only lost 80% of its surface area but it has also become thinner and lost up to a metre in thickness locally. At this rate, scientists estimate that it will disappear by 2020. According to a UN report published in November 2006 for the 12th International Conference on Climate in Nairobi, by 2025, about 480 million people in Africa will live in regions lacking water or in regions where water is severely limited.