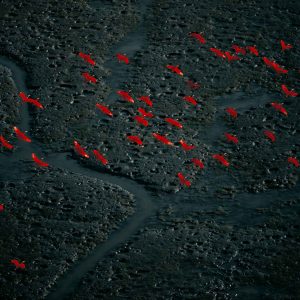 From the Llanos region to the Delta Amacuro region which is the mouth of the Orinoco River, over a third of Venezuela’s surface area is made up of wetlands, the favorite habitat of the Scarlet Ibis (Eudocimus ruber). These waders live in large colonies in mangroves and only travel a few kilometers to feed. The carotene from shrimps, crab and other crustaceans they eat gives the birds their characteristic pigmentation. The feathers of the Scarlet Ibis, which used to be used by locals to make coats and fineries, are now used to make hand-crafted artificial flowers. This bird coveted for its feathers as much as for its meat is now threatened; there are only 200.000 of them left in their range, in Central America and South America.