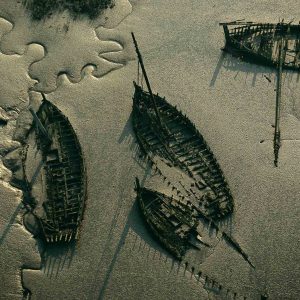 Nestling in the hollow of the last meander of the Blavet river, where it slows down before ﬂowing into the Scorff river at Lorient, dozens of wrecks lie in the marine graveyard of Kerhervy. The oldest ones, those of the tuna ﬁshing boats from the Île de Groix (which rises out of the Atlantic a few miles offshore), have been lying in this bend in the river since 1920, and are sinking inexorably into the mud. The last boat was dumped in January 2001, when the Ouragan (Tempest), a trawler from Port-Louis, went to its last resting place, joining the timelessly picturesque dandies that sank in the Blavet estuary. Countless vessels sail the planet’s seas without going into retirement. Ships more than ﬁfteen years old account for 40 percent of the world ﬂeet, but for 80 percent of accidental shipwrecks. However, age is not a deciding factor: the oldest boats are mostly owned by operators who have tried to cut costs, both in equipment and in the crew’s work conditions and training. And 80 percent of shipwrecks are due to human error.