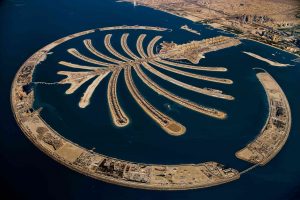 Fifty years ago, Dubai was nothing more than a few rammed-earth houses, a souk and a port for the dhows sailing the Arab-Persian Gulf and the Oman Gulf. Enriched by the oil revenues of the neighbouring emirates, the State now develops its economy on tourism and has launched the construction of artificial islands. Of the three islands currently being created, palm-shaped Palm Jumeirah, the smallest, is attached to the mainland by a bridge. It consists of a 2 km long “trunk” from which grows 17 “palm leaves” with villas. An underwater tunnel links the extremity of the island to an 11 kilometres-long crescent, which will host luxurious hotels. Launched in 2001, the construction cost almost 12 billion dollars, and is now almost completely finished despite the financial crisis in 2009 that almost made the Emirates go bankrupt. In order to create the island, nearly 94 million cubic metres of sand have been dredged from the sea floor and 40.000 workers were mobilised. This technical prowess achieved by Dutch engineers specialised in construction on water could not have been possible without the massive use of imported labour. Of the 1.8 million people living in Dubai, 80% are underpaid migrant workers. In this non democratic citystate where the Unions are forbidden, and more generally in the United Arab Emirates, Human Rights Watch has qualified their working conditions as «less than human».