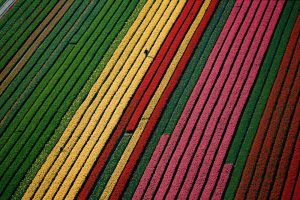 Every year in spring, the Dutch countryside briefly dons a multicolored garb. Since the first flowering in 1594 of bulbs brought back from the Ottoman Empire by the Austrian ambassador, four centuries of selection have led to the development of more than 800 varieties of tulips. The region around Lisse assumes a commercial production of bulb crops. On more than 58.000 acres (23.500 hectares), the Netherlands produce 65 percent of the world production of flowering bulbs (or some 10 billion bulbs). But this success has been obtained at a high environmental price: in the 1990s, Dutch pesticide usage was the highest in Europe. Both the public and private sectors have therefore signed agreements regulating the use of chemical products, waste and energy, and farmers have begun to make use of natural predators to protect their crops. Similar environmentally conscious initiatives are happening worldwide; in several Canadian cities, as well as in the town of Rennes, in France, local councils have prohibited the use of chemical pesticides in public parks.