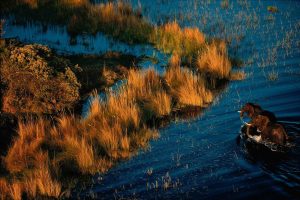 African elephants (which belong to 2 species : Loxondonta africana and Loxodonta cyclotis) travel for miles to find the 100 to 200 kg of vegetables they need to feed themselves on a daily basis. They follow the dominant female in single file and communicate by moving their trunks and ears, through smell and strokes or a range of low frequency sounds that are inaudible to man. These animals are tracked for their ivory and are under threat of extinction. Their numbers went from 2.5 million in 1945 to 600 000 in 1989 when the ivory trade was banned. Today, there are about 300.000 elephants left and they are concentrated in reserves that are often too small to ensure their subsistence without deteriorating ecosystems or harvests in countries already affected by malnutrition. In spite of these damages, eleven Central and Western African countries have asked – in vain – that the complete ban on ivory trading should be maintained to stop poaching and solve all elephant conservation problems. The means allocated to ivory control are insufficient and the partial resumption of international trade, even if only partly, has left poachers free to operate. In 2011, according to the NGO Traffic, over 2.500 elephants were hunted. This equals only a 1989 figure.